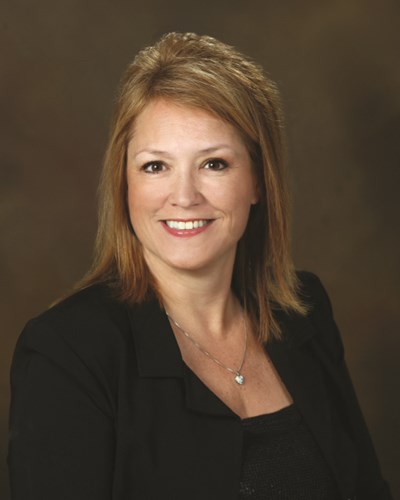 Stephanie Andresen of Omaha, Nebraska, can point to a variety of Gleaner Life experiences — from different ages and different perspectives — that helped prepare her to become the newest member of the Gleaner Life Insurance Society Board of Directors.

There were childhood picnics when her family grew
involved with Gleaner Life in the 1970s. Her first term as Gleoma Arbor’s president (1988-1990) came right after college. She watched 2,000 guests attend an arbor Easter egg hunt for which only 100 guests were expected, and
she served for six years (2011-2017) on the Society’s Supreme Arbor.

There also was the first time that she delivered a death benefit check. “It changes your perspective of what Gleaner’s true mission is,” Andresen pointed out.

Andresen brings all those perspectives as a Society
director. She was named this spring to a vacancy created Nov. 4 when Todd Warner resigned from the board to become Gleaner Life’s new senior vice president and chief financial and investment officer.

Being raised in one of Nebraska’s strongest Gleaner households guided Andresen’s direction. She bought her first certificate when a high school senior. She remembers her father, Jim Hartline, playing volleyball against fraternal director Bill Warner when he would come to Omaha each year. Andresen said she follows the footsteps of her mother, former Supreme Chief Gleaner Trudy Hartline. Andresen was a Gleaner agent from 2008 to 2014. She also was the one who delivered her father’s death benefit to her mother, helping her pay off their house with the proceeds.

Applying for the Board was something Andresen considered carefully while serving on the Supreme Arbor. It was there that she became familiar with bylaws, met many arbor delegates, enjoyed being escorted by Emerald Echo (OH) Arbor Chaplain Don Steele at two Grand Marches, and gained greater appreciation for what the Society does beyond life insurance.

Andresen and her husband Steve, married for 28 years, have worked hard to instill that fraternal spirit in their two daughters, Shannon and Shelby. Shelby and her husband Phil are expecting their second daughter in August. In addition to being grandparents, the Andresens also love watching sunsets at their permanent campsite on the Missouri River, and attending at least one game each season with their favorite team, the Chicago Cubs.

“The most important skills I bring to the Board are enthusiasm, a positive attitude, the ability to see the bigger picture, to listen and understand, and do the right thing,” Andresen said.

Some of Andresen’s highlights with Gleaner Life include volunteering at seven conventions over the past 15 years, a second stint as president of Gleoma Arbor (2002-2019), becoming familiar with Gleaner by-laws and members by serving on the Supreme Arbor, providing fraternal advice with the Gleaner Fraternal Committee (2005-2017), and accepting a check at the 2007 Schaumburg, Illinois, convention for more than $10,000 on behalf of Gleoma Arbor for its community service work.

Developing a Christmas Shopping with Kids program proved to Andresen how projects can give arbors a sense of mission and embody the Gleaner spirit. “Over 13 years, we estimate that we took over 1,000 kids shopping with the help of nearly 1,800 volunteers,” she recalled. “Over those years we paid for multiple first bikes, first bras, winter coats, shoes for the family, a Christmas tree because they were homeless. The kids had no rules; they could buy whatever they wanted, yet they rarely bought for themselves. This — giving back to our communities — this is what it’s all about.”