2020 is the 75th anniversary of the final battles and the eventual end of the world’s deadliest war.

A dwindling number of veterans and other survivors are participating in events this year. They’re marking the 75th anniversaries of the final battles and closing events of World War II, the deadliest war in history. 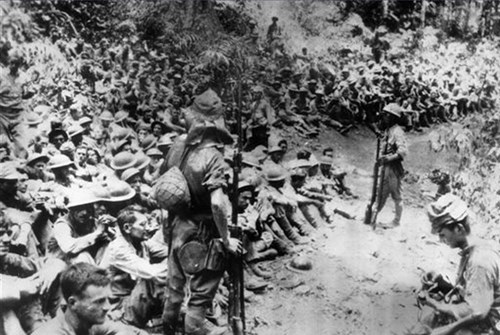 Many Gleaner Life members remember the war, which was blamed for as many as 85 million deaths. The civilian toll in many nations exceeded that of soldiers killed, and all groups including children were expected to “do their part.”

World War II had roots in harsh peace terms imposed on Germany in 1919 after World War I’s end. Fascism took hold in Germany, Italy and Japan, which each began expansionist campaigns against neighboring countries in the late-1930s. World War II officially began with Nazi Germany — aided by the Soviet Union — invading Poland in 1939, drawing in Great Britain, France and other allied countries. Japan attacked the U.S. naval base at Pearl Harbor on Dec. 7, 1941, bringing America into the conflict. 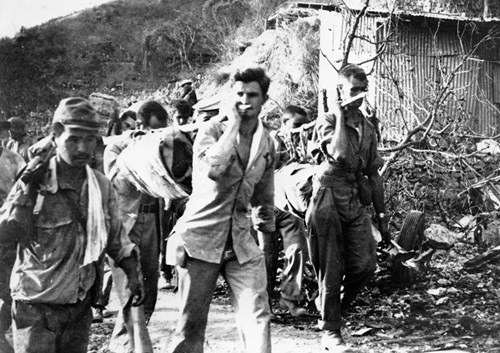 Army Air Corps First Lt. Raymond O. Carr of the South Fairfield Arbor (OH) was honored in 1943 for battles he participated in during 81 operational missions in one year, including 21 over target zones. He was transferred back to the states to become an instructor.

Women also served bravely. Army Lt. Elizabeth A. “Betty” McKinnis of Bowling Green Arbor (OH) applied for foreign service after Pearl Harbor. She served as an Army nurse in Australia, India and China and was promoted to captain. Before enlisting, she had graduated at the top of her class in nursing school and served for seven months as night supervisor of Community Hospital in Bowling Green.

A total of 130 claims were paid for Gleaner members killed in service during the war. The first one paid actually involved Canada’s armed forces. Pilot Officer Harold LeRoy Spangler had joined the Royal Canadian Air Force before the U.S. entered the war. The Sugar Ridge Arbor (OH) member was still with a Canadian air crew when he was killed in Scotland on Sept. 17, 1942.

Although it wasn’t known at the time, the first Gleaner Life member to die in service had been Army Pvt. Raymond Robert Diemer of New Bavaria, Ohio, a member of the Deshler Arbor. He had volunteered before the war and was assigned to U.S. forces in the Philippine Islands. Diemer was 23 when he died in a Japanese prison camp of malaria and dysentery after the Bataan Death March. It took three years for the War Department to learn of his death and notify his parents.

The last combat death involving a Gleaner member claimed Army Air Corps 2nd Lt. Walter Roper, 30. He was part of a B-29 Superfortress bomber crew that took off from Tinian Island on June 22, 1945, and was believed shot down over Japan. Roper had been a member of the Bowling Green Arbor (OH) since Jan. 1, 1939.

Illness claimed the final Gleaner serviceman on Feb. 20, 1946, when Cpl. Charles Leonard Haas, 35, of the Delaware Arbor (OH) died in the Vaughan General Hospital in Hines, Illinois. He had entered a combat engineer unit and had become severely ill while stationed at a Kentucky training post.

The 130th and final gold star of the war, however, was for Marine Corps Pfc. Frederick C. Lutz, who actually had perished nine months before his death was reported in the July 1946 Forum. He died when the Japanese prison ship Arisan Maru was sunk Oct. 24, 1944. He was 21 and a member of the Gary Arbor (IN).

Many servicemembers killed did not have fully “paid up” Gleaner life insurance, so the standard war clause exclusion had been added to their policies. Gleaner Life’s Supreme Council, however, chose to pay all beneficiaries the policies’ full amounts. In all, Gleaner Life paid $109,692 (about $1.6 million in today’s dollars).

Bowling Green Arbor at one point had 57 members serving in the military, and two died overseas. Two arbors – Ottokee (OH) and Gary (IN) – both suffered five members killed. 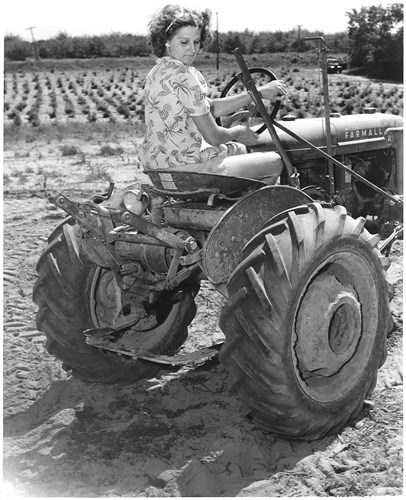 The war also transformed civilian life. Forum magazine gave tips for planting Victory Gardens. In addition to women working in factories, memorialized by Rosie the Riveter, more than 3 million non-farm U.S. women were mobilized to work on farms. The Women’s Land Army was headed by Florence Hall, a Port Austin, Michigan, native and graduate of the Michigan State College of Agriculture.

To collect more material for production, arbors helped organize “scrap metal drives,” “rubber drives” and “grease drives.” Civilians were required to ration basic items such as gasoline, tires, meat, butter and even shoes. Gleaner Life’s Illinois state manager, E.C. Fortin – in hope of “writing some new business faced the fact his tires were none too good” – rented a friend’s mule to attend a 1942 Gleaner picnic at Gilman Arbor (IL).

The war also created a shortage of insurance agents, so the December 1942 Forum noted that arbor secretaries were being trained to help sell and service policies: “Arbor Secretaries are loyally responding to a war-emergency plan which has been sponsored by the Home Office and is now being put into effect by the field force. A large percent of these Secretaries have already enrolled and by so doing become part of the field force.”

Wartime travel restrictions caused Gleaner Life to postpone biennial conventions in 1943 and 1945. When the October 1947 convention took place in Fort Wayne, Indiana, names of the 130 gold star servicemen were read aloud, along with 3,143 other Gleaner members who had died since the last Gleaner Life convention in 1941.

Frank Dick returns to scene of Battle of the Bulge 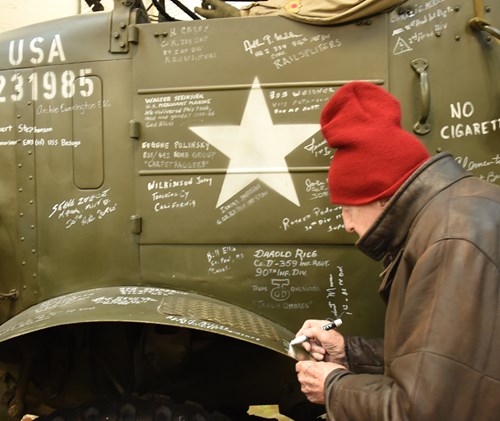 Before any of that, however, he was a cold, 18-year-old U.S. Army private first class, fighting with Gen. George Patton’s Third Army in the snowy Battle of the Bulge.

Frank was invited back to Europe by the Battle of the Bulge Association Dec. 9-19 to help commemorate the 75th anniversary of the battle, the largest battle ever fought by the U.S. Army. He and six other veterans in the group visited key sites and were honored by numerous leaders. Dignitaries included the Grand Duke of Luxembourg, the king and queen of Belgium, the prime ministers of Belgium and Luxembourg, the president of Poland, U.S. ambassadors to both nations and many more.

Yet it was the appreciative crowds of tens of thousands of ordinary Europeans who waited in the rain to honor the U.S. veterans that most stood out to Frank. Crowds lined up to see the group, to get an autograph on a flag or helmet, or to have their children’s picture taken with them.

“The heroes were buried there,” added fellow Gleaner and former mayor of Adrian, Michigan, Gary McDowell, who accompanied Frank on the trip and whose father also fought in the battle.

“They had nice receptions,” Frank said, “and a little champagne once in a while, but it was just the feeling that this is something they want to do. Not because they’re required to do anything. And Gen. Patton is a hero there; he’s buried there.”

Pfc. Frank Dick had entered the Army at 18 after high school graduation. He was trained as a mortar crewman in Company I of the 317th Infantry Regiment in the 80th Division (the “Blue Ridge Division boys”).

Frank sailed to France and became a replacement soldier for Gen. Patton’s Third Army. He rode aboard “40 & 8” French rail cars (“40 men or eight horses”). Troops were so cold they burned smashed furniture to stay warm. Frank arrived on the battlefront in the Ardennes region of Belgium on Dec. 14, 1944. Two days later, Nazi German forces launched a surprise attack through the Ardennes region of Belgium, northeast France and Luxembourg. Their goal was to split U.S. and British forces and capture Belgium’s vital port city of Antwerp, potentially ending the Allies’ advance.

The German attack overran many American units and surrounded others. Most famously, U.S. soldiers holding the Belgian village of Bastogne were ordered by Germans to surrender, but a U.S. general refused, giving a one-word reply: “Nuts.” Frank’s 80th Division was thrown north to relieve Bastogne. The entire battle involved 610,000 U.S. troops and lasted six vicious weeks in below-freezing conditions. Truck engines froze along with blood plasma bags. To stay warm, Frank followed his grandfather’s advice to line his boots with newspapers. The weather mostly grounded Allied planes, but on Christmas Eve clearer skies enabled a supply drop where Frank and his buddy, Donald Gust, were fighting.

“We opened those up,” Frank remembered, “and you know what was in them? Pancakes and orange marmalade!” 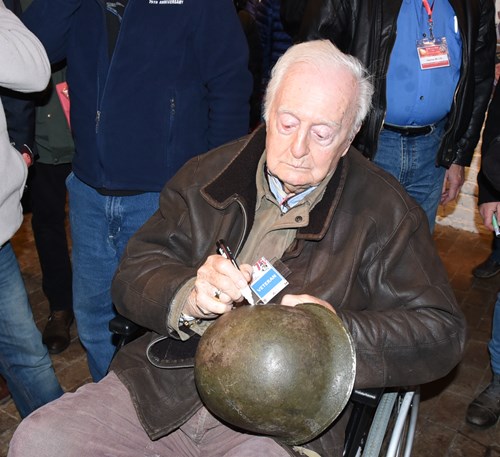 The 80th Division helped Allied forces cut off and stop the Germans’ last major offensive of the war. The cost was high as each side suffered about 90,000 casualties. Three weeks after the battle, on Feb. 19, Frank and his crewmate came under mortar attack while in their foxhole and both were wounded by shrapnel. Frank’s wounds included severe damage to his right arm that resulted in surgery in England and treatment with then-new drugs penicillin and sulfa.

He was shipped to a Virginia hospital and allowed to come home to Ohio for rehabilitation, receiving the Purple Heart and the Bronze Star among other awards, before honorable discharge. He used the G.I. Bill of Rights education benefits to receive his first degree in education and begin his career in that field.

“It gave me the opportunity to get the GI Bill and attend Bowling Green State University,” Frank said. “That helped mold it all. I think the government has been awfully good to me because I had my bachelor’s degree and my master’s degree all with the GI Bill. So, all in all, I’m thankful for what this government has – and is – doing for me, but it also gives you encouragement to help others.” 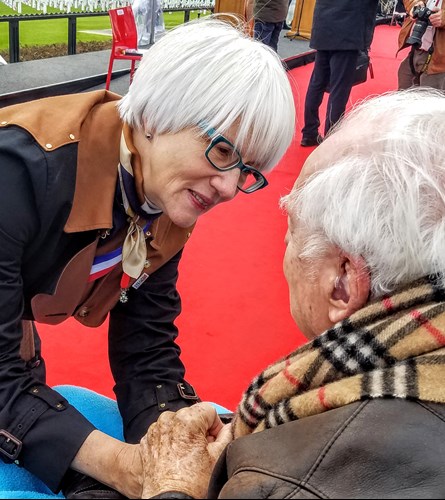 While in Europe, Frank chatted one-on-one with Henri, the Grand Duke of Luxembourg, as well as the prime ministers of Luxembourg and Belgium, U.S. Speaker of the House Nancy Pelosi, Gen. Mark A. Milley, chairman of the Joint Chiefs of Staff, U.S. congressmen, and many others. One of those was Gen. Patton’s granddaughter, Helen Patton, at the Luxembourg American Cemetery where her grandfather is buried.

Frank also was able to give the Duke of Luxembourg a medal commemorating the 100th anniversary of the American Legion in Michigan.

Gary McDowell recalled. “When Frank gave the duke the medal, he said ‘Nobody ever gives me anything. Can I open it?’”

Frank was present at a ceremony at Bastogne where Americans and a German army survivor all helped to plant a “Peace Walnut Tree,” a nod to the American commander’s legendary reply of “Nuts.”

Frank was 93 in December when he returned to Europe. Fellow veterans on the trip also were in their 90s or older.

“When you consider we’re 75 years away from this event,” Gary said, “which would be the equivalent of about three generations of people in those families, and they turn out to see these seven vets in the tens of thousands – and I’m not exaggerating – just to see them or to get an autograph or to have their kid’s picture taken with them. It was overwhelming. And we saw this in several towns. Bastogne was the largest of them.”