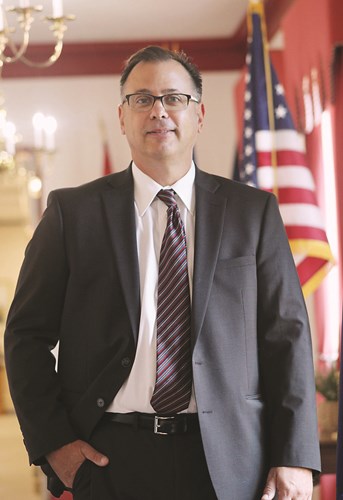 Anthony Clark, a 26-year insurance executive and a former Gleaner Life Insurance Society staff member, has returned as its 10th President and CEO. He began work on Aug. 12 after being selected by the fraternal life insurance society’s Board of Directors.

“Gleaner is a great organization,” Clark told employees at his introduction. “I love what you do, I love the members, I love the philanthropic events, all the volunteer hours. Everything you do in this organization connects with people.”

Clark’s first tenure with Gleaner was from 2008 to 2012 when he was in charge of Risk Management and Product Development. He has also worked for General Electric Capital insurance division, CNA and General Reinsurance (a Berkshire Hathaway company). His experience is in the areas of insurance marketing, overseeing a 50-state broker network, underwriting and strategic planning. At General Reinsurance, the fifth-largest reinsurer in the world, he held the position of Vice President and Chief Underwriting Officer.

Clark succeeds Margaret M.S. Noe, a Gleaner Board member who served as Interim President and CEO for four months following the retirement of Kevin Marti. Noe, a retired Michigan judge, also was the first female CEO in the Society’s 127-year history.

Clark noted that his first experience with Gleaner was at a picnic when he was dating his high school sweetheart. They’ve been married now for 35 years. The Clarks have two grown sons, the eldest resides in Rome, Italy serving as a Franciscan and the other in Lansing, Michigan.

Founded in 1894, Gleaner Life Insurance Society is a nationally recognized not-for-profit fraternal benefit society. Gleaner assists its members in achieving their financial security goals through a broad range of life insurance and annuity financial solutions. As a fraternal organization, Gleaner provides volunteer opportunities and supports outreach programs, which make a difference in the lives of our members and the communities where they live, work, and serve.