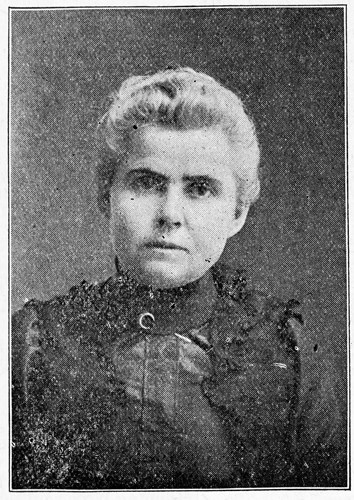 This August marks 100 years since the 19th Amendment to the U.S. Constitution made women’s suffrage a reality. For the founding Gleaner Society members, it followed a quarter-century advocating in favor of equal standing for women.

Founded with the biblical story of Ruth in mind, the original Gleaner charter had ensured women would have equal membership and voting rights. In 1901, Alice Mason of Ionia, Michigan, was elected Supreme Council Chaplain by Gleaner members at the Third Biennial Convention, the first woman elected to a fraternal office in Michigan.

In state and national elections, however, women had been unable to vote for more than a century since New Jersey had erased that right in 1807. The battle to reclaim and enshrine that right in the Constitution became a long struggle nationally by women such as Elizabeth Cady Stanton, Susan B. Anthony and Alice Paul.

Gleaner members joined them, especially in rural areas, and backed a statewide 1913 vote that fell short. Grant Slocum wrote with regret in the May 1913 Gleaner Forum: “The Gleaner membership has satisfaction in knowing it stood practically unanimously for the emancipation of loyal wives and daughters through the granting of an equal franchise, and its influence will without question always be felt in this direction. … The principles of benevolence, protection and fraternity are in a great degree identical with the principles involved in the suffrage movement, and this fact alone will ever lead our organization in the direction of Equal Suffrage.” 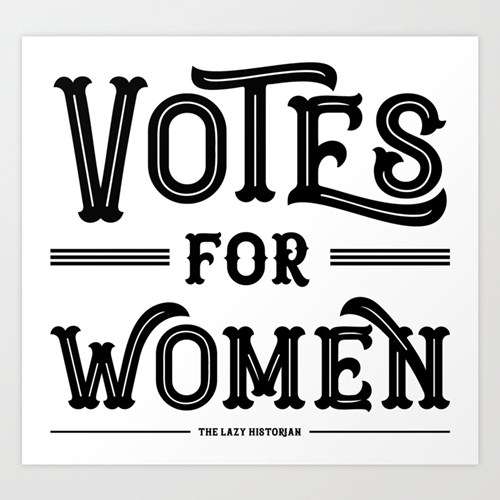 Michigan men finally voted in 1917 in favor of giving women voting rights in all Michigan elections. The next challenge became state and federal constitutional amendments, as well as electing members of Congress in midterms who would introduce and pass such an amendment.

Gleaner leadership played a key role. Two months before the 1918 election, Michigan’s Mount Clemens Monitor reported, “Grant Slocum has an organization going that promises to do much for the cause of women’s suffrage at the fall election. He is chairman of a federation of 25 state organizations, to which it is expected to add as many more. … It looks more and more as though women will be winners in Michigan this fall. Their ultimate triumph is certain and, this being the case, many men hitherto groping in darkness are seeing the light and realizing that it is ‘good politics’ to turn in with the winners.”

Illinois, Wisconsin and Michigan on June 10, 1919, became the first three states to ratify the “Susan B. Anthony Equal Suffrage Amendment,” with Michigan lawmakers approving it unanimously. Six days later Ohio and Kansas joined them. Indiana became the 26th state on Jan. 16, 1920, but the deadline for 36 states to pass it before the next congressional election in November was drawing close. Tennessee finally became the decisive state on Aug. 18 after 24-year-old state Rep. Harry Burn broke a 46-46 tie to take up the amendment. Some of the anti-suffrage lawmakers tried fleeing the Tennessee capital to prevent a quorum. They failed, though, and after the final vote was formally received at the U.S. Capitol, the 19th Amendment became law on Aug. 26. 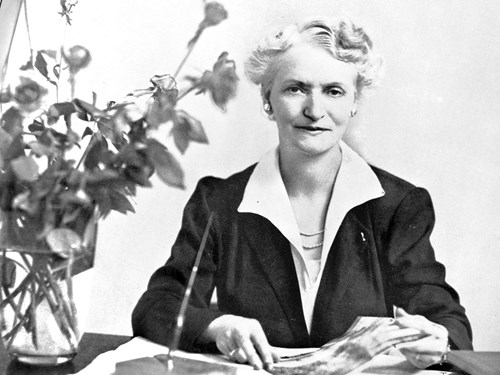 In the annals of Gleaner Life Insurance Society, perhaps no member witnessed quite as much growth first-hand as Mabel Clare Ladd. From the early Gleaner years in Caro through its successful work for women’s suffrage and into the 1950s, Ladd was a key employee behind the scenes for more than 50 years.

Born on Nov. 3, 1885, her lifelong association with the Society began while growing up in Caro during the first Gleaner years. On her 40th work anniversary in 1943, she recounted how, as a girl, her mother took her to the Caro Arbor’s annual meeting and its election of officers. She remembered a poem recited that referred to a “horseless carriage” — something neither she nor her mother understood. There she also met Gleaner founder Grant Slocum. “Mr. Slocum asked if I was enjoying the program and whispered the promise that when I grew up, I too could be a Gleaner and perhaps I could come and work for him in the office. That was the first highlight in my business career for it was a prophesy to come true.”

Ladd did go to work for Gleaner on Aug. 1, 1903 after high school at age 17. She remembered her first duty was to record new insurance applications, assign them a number, “carefully wrap and tie them, and then take them down the street to a couple of blocks to [Gleaner Medical Director] Dr. Chase’s office, there to answer his telephone, receive his patients and otherwise put in time while he reviewed these applications. Occasionally Mrs. Chase would call me over to the house to enjoy fresh buttermilk and new made cookies and I was always allowed to carry a tray with a glass of buttermilk and two cookies back to my beloved doctor – the same doctor who was responsible for my safe arrival in this world and now was guiding my first footsteps in the business world.”

At the time, Gleaner headquarters were in the State Savings Bank. Ladd moved with the Society in 1908 into its third home, located on the second floor above the Post Office in the McNair Building. There she received her first private office, a tiny reception room at the top of the stairs. She continued her work with the Application Department, while also filing correspondence and serving as receptionist. When the Society began moving operations to Detroit, she moved as well. Through Gleaner, she was able to graduate from several University of Michigan summer programs over the years. In April 1918, Ladd was promoted to assistant editor of The Gleaner, as it was then known. “We now know,” Gleaner Medical Director Malcolm Wickware wrote in 1943, “that Mr. Slocum was able to distinguish good journalistic ‘timber’ when he saw it.”

1920 was one of many significant years for Ladd. After handling correspondence and the women’s page of the Gleaner Forum, she wrote several front-page stories that year. As the publication struggled with a new editor who lasted only a few months, Ladd assumed more responsibility. In August, her name appeared as the publication’s business manager. The only other staff member listed was Slocum himself, who briefly resumed his publisher’s role. Several Gleaner officers’ names would appear as “editor” throughout the next four decades, but Ladd would be the publication’s one constant. 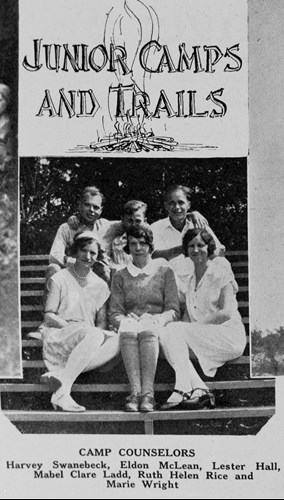 Two of Ladd’s passions were young Gleaners and nature. She became supervisor of the Junior Gleaner department, served as a counselor at summer camps and was an officer in the Detroit Audubon Club, organizing the Young People of the Detroit Audubon Society. Ladd also was a longtime member of the Detroit Business Women’s Club and was elected in 1942 as president of the Michigan Fraternal Congress.

Ladd made sure accomplishments by other women — both inside the Society and outside — received recognition. In the June 1933 Forum, for example, she wrote an article “Women in Politics” that highlighted U.S. Secretary of Labor Frances Perkins, Director of the U.S. Mint Nellie Tayloe Ross and Ruth Bryan Owen, the U.S. ambassador to Denmark. All three were the first women to hold those positions in U.S. history.

Recording and preserving Gleaner history, however, may be her most well-known contribution. In 1963 she put together a loose leaf notebook titled “Historic Highlights” that provided many of the details of the Society’s first seven decades. As she worked with each of the first five Gleaner presidents, Ladd’s career saw nine U.S. presidents, two world wars, several pandemics, financial crises — all bridging a time before “horseless carriages” and women’s suffrage to the jet age.