A message from Gleaner Life regarding COVID-19: With growing uncertainty about the novel coronavirus (COVID-19), we at Gleaner Life Insurance Society want our members to know that we’ll be available to help. Read more. 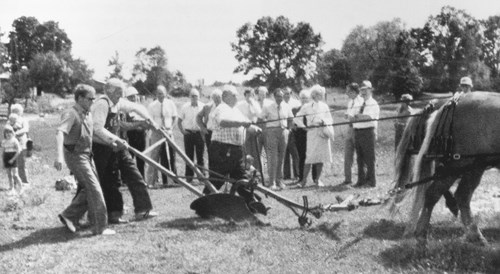 Four decades ago, Gleaner Life Insurance Society dug back to the roots. And, like its founders, it used a horse-drawn plow.

It was on Aug. 4, 1980, that two key Gleaner Life figures, President Frank Dick and Fraternal Vice President Bill Warner, broke ground for the new Home Office as they stood behind a wooden plow, furrowing into a former farm in Michigan’s Adrian Township.

“Those farmers that plowed with a horse were stout fellows,” Bill Warner pointed out, “because I remember when Frank and I started plowing, it was all we could do to stay up with those horses.”

The groundbreaking would be followed a year later by the opening of a new Home Office in a rural Michigan county, much like the one where the Society was founded in 1894. Finding a new Michigan location, however, took decades. A bid to relocate from Detroit to Hillsdale fell through in 1951, and the Society moved instead to the Detroit suburb of Birmingham. As the 1970s drew to an end, President George Ransford negotiated the sale of the Birmingham building. On the same day as Ransford’s retirement, Frank Dick was made president by the Board of Directors. It assigned the task of finding a new site in Michigan, the state where Gleaner Life was chartered and where more than half of its members lived at the time.

“I took a map and Shirley went with me and we went to five or six different locations,” Frank recalled. “We went into Hillsdale and explored that. We went to Coldwater, we went to Marshall, and we went to one other and we considered Adrian and Tecumseh. We wanted a place that had a good location, a good highway in and out, a good school system, good housing, and colleges would be a plus.”

Warner remembered one trip on U.S. 127/223 and arriving at Adrian. “As we started into town, there was a nice hill and a farm out there. Frank said, ‘I think the building I have in mind’ — he’d talked about a colonial-like structure — ‘would look great there.’ Frank had great vision, and he could see the whole thing.”

Choices were narrowed to two or three sites, which were visited by the Board. “My recommendation was for Adrian,” Frank said, “because you had good utilities, a good business community and city sewage was available.”

The land was owned by farmer Arthur Snyder’s family. “We made them an offer. They turned it down the first time,” Warner said. “But Frank, being the type of person who never gives up on anything, negotiated an offer and not only included the farmland but land behind it that had an old school building on it.”

The Board of Directors approved purchasing the two parcels totaling 106 acres. Snyder took his down payment check and signed it back to Gleaner Life, becoming a member and purchasing what was then the largest annuity certificate in Society history. After that, extensive planning occurred to ensure a strong yet beautiful new home.

In August a groundbreaking ceremony took place. Leonard Davis, vice chairman of the board, gave an invocation asking for “Divine guidance in the Gleaners’ use of the land to help people and communities,” the 1980 fall edition of Forum reported. “Then gripping the hafts of the single moldboard plow, Mr. Dick set the point.” Snyder’s two purebred Haflinger draft horses — a gelding named King and a mare named Cuke — pulled forward and Cuke’s colt ran unfettered alongside. It was a visual symbol of family strength that would soon be reflected in a strong, new Home Office.